One late afternoon in 1999 I was strolling around Tirtagangga. The sun was very low as it was just before sunset, causing a surrealistic light in the sky which at the same time was reflected in the water in front of me. From the southeast corner I had an overall view of the park. The magnificent Banyan tree on the other side of the park dominated the scene. Under this tree is the temple around the spring that continuously feeds the ponds in the park. As meaningful islands in the middle of meaningless see of land, there are some places in the world, such as the setting of the Banyan tree, that are more serene than their surroundings. Most temples in are built on such a spot. 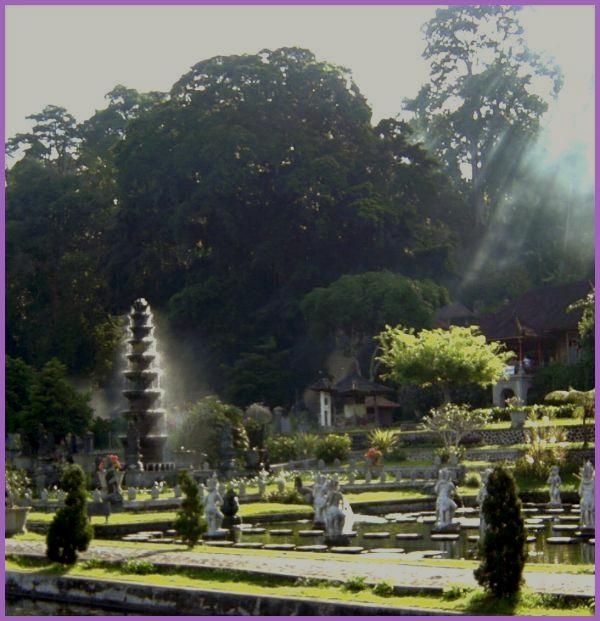 While contemplating the scene I felt a strange attraction towards the tree. In front of my eyes it seemed to grow immensely in proportion and in vivacity. It captured my attention more and more until nothing else existed but the tree. Many voices, wordless but which I could understand, seemed not to come from inside of me but from within the tree.

At first the voices imparted a distressing vision of the park falling into disrepair. All parts which were already in decline seemed at that moment to become even more desolate and deteriorated than they were in reality. The broken gutters and pathways, the overgrowing weeds, the rubbish that was lying around and floating everywhere, the television antenna that spoiled the view and everything else in the park that was ugly struck me increasingly in intensity until I was completely overwhelmed with feelings of agony and despair.

Then this sombre vision slowly changed, firstly to a neutral one, and then gradually becoming more appealing until it was ultimately one of splendour. One by one the ugly statutes disappeared or were replaced by noble masterpieces. Water started once more to pour from the fountains. Suddenly the barbed wires disappeared, replaced by birds and butterflies that settled on flowers which seemed gradually to sprout from the ground all around. Golden fishes started to fill the ponds.

The voices from the tree seemed like cries from a thousands souls. The souls of those deceased, those still alive and those yet to be born; people who had enjoyed the park in the past, were enjoying it in the present and were yet to enjoy it in the future. It was almost like a chorus yearning to transform the sad vision into the one of splendour. Until that moment I had cared little about the park, taking its existence for granted. But from that moment on I was determined to respond to their yearning.

Although the Banyan tree was still just as magnificent it seemed to lose its grip over me. Gradually I was able to shift my attention from the tree to my surroundings. In the faint light of the sunset the park once more assumed its normal form.

In reality all of this happened just in the space of a few seconds, but to me it was a long and overwhelming experience. Soon after this occurrence I realised that the splendorous vision has also been shared by others; people whose support up until today has been crucial in transforming this image into reality.

Although many may have thought that I was the same person who continued his walk from the southeast corner of the park that afternoon, I knew that the Banyan tree had thoroughly changed me.