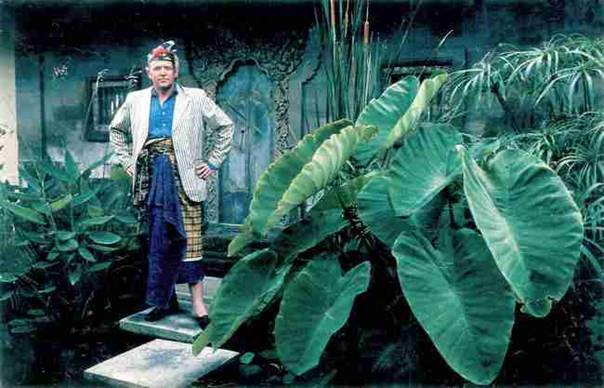 Word has been received by Balidiscovery.com of the death in of Michael White on Sunday, August 28, 2016.

White was more commonly known across his adopted Island home of , as Made Wijaya.

A native, Wijaya arrived in as a deckhand on a sailboat in 1973. Persuaded that he had discovered his personal “ Hai” Wijaya tells how he jumped ship in a rainstorm and swam ashore.

A student of architecture, the young Australian was adopted by a Brahman family in and initially eked out a living by teaching tennis, tutoring English and writing a weekly column for a local newspaper.

A keen interest in landscape architecture landed him an initial commission designing the gardens of the Bali Oberoi and the establishment of PT Wijaya Tribwana International that today employs hundreds of designers and gardeners who have designed countless gardens in Bali and around the world for celebrities and hotels located in Singapore, India, Spain, Morocco, Hawaii, Australia and Mexico.

Wijaya published five books: The Complete Stranger in Paradise; Balinese Architecture: Towards an Encyclopedia; Tropical Garden Design (Archipelago Press and Wijaya Words, 1999); At Home in Bali (Abbeville Press, 2000); and Architecture of Bali – A Source Book of Traditional and Modern Forms (Archipelago Press and Wijaya Words, 2002). He also contributed to Tropical Asian Style and was the main author of a pocket guidebook to .

Possessing an encyclopedic knowledge of Balinese history and culture, Wijaya commanded a native ease with the Balinese language. Erudite and devilishly witty, Wijaya was a raconteur par excellence who published his social commentary at www.strangerinparadise.com and in “Poleng” a magazine he founded.

No announcement has been made at this time in connection with Wijaya’s death and what, if any, religious or memorial service is planned for the Australian who many years ago converted to become a Bali Hindu - the dominant religion of his adopted home.

© Bali Discovery . Articles may be quoted and reproduced if attributed to http://www.balidiscovery.com.