The sculptures of Tirtagangga represent the following Balinese Hinduism concepts:

This concept divides the cosmos into Bhur, Bwah and Swah. Swah is the upper world of Gods, Bwah is the middle world of men and Bhur is the lower world of demons. Similarly, sculptures of the divine world, such as the many Hindu Gods (each represents an aspect of the only God Sang Hyang Widhi Wasa) will be placed in the higher northern part of the gardens. The middle part will be mainly occupied by sculptures of men and other objects of daily life. Sculptures of demons, leyaks and other lower world creatures will decorate the lower southern part of the gardens.

For everyone who wants to know more about Triloka, Mr. Thomas Moog has done a comprehensive study in the German language by explaining the representation of this concept in Tirtagangga. Surf at www.moogbooks.com, or click directly on the chapters below.

The transition between these worlds is expressed by the 8 sculptures at the meditation centre in the north-west corner of the garden.

Arising from the water of the middle-east pond, the struggle of men between Gods and demons is symbolised by 20 sculptures of Mahabharata figures.

The tension between Gods and demons, between good and bad, is also represented by the sculptures of Barong and Rangda at each end of the middle footpath.

Along the whole footpath around the gardens sculptures will be placed to emphasise the differences between these worlds. Lamps may be combined with these sculptures to light the path according to the lightingplan.

Eight sculptures around the fountain tower in the middle of the gardens represent Nawa Sanga or Sanga Mandala concept of cosmological orientation, a manifestation of the never ending quest for order and harmony. Nawa Sanga delineates eight cardinal directions around the centre point ofSiwa, often represented as a phallus like the fountain tower it self. As shown below, the directions are dominated by mountain-sea axis and sunrise-sunset axis, symbolised by specific colours and deities according to Balinese mythology. 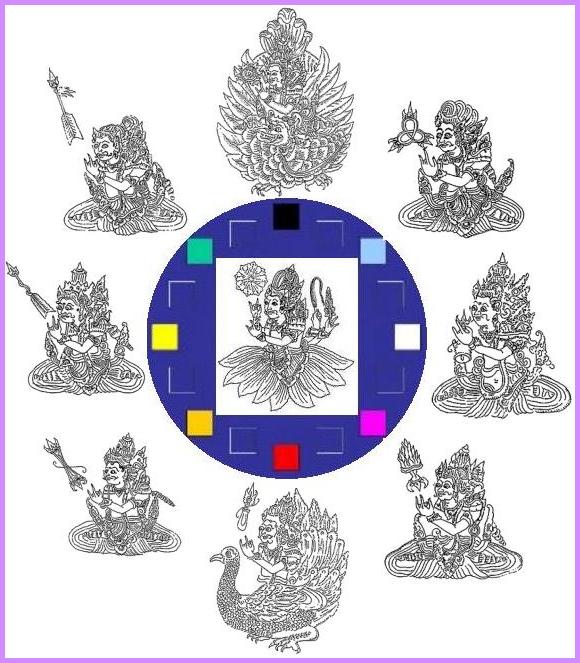 The physical transformation of Nawa Sanga as one of the principles of Balinese architectural design can be best exemplified in the spatial arrangement of a typical Balinese housing compound. The traditional house is divided into nine areas, whereby the Sanggah Kemulan or Pamerajan as the most sacred is located in north(kaja)-mountain direction, aling-aling or the entrance gate, as a dirtiest and the most public, is located in south(kelod) -sea direction; and bale-bale or the working and sleeping places occupy the centre area surrounding Natah or Natar.

In Bali, the most sacred area is always placed in the direction of the holy mountain () in the north, while the most public located seaward at the south. Such being the case, there are many variations due to different geographical conditions, particularly concerning the location of as a point of reference. Towns and villages in southern part of the island will have the reverse orientation as compared to those in the northern part of . Furthermore, is not the sole point of reference in creating Nawa Sanga ideal orientation. In some mountainous villages for example, the directions are not oriented towards but the nearest mountain which is clearly visible.

Below are the names of the Pandawa and Kurawa figures, which arise from the water of the middle-east pond to symbolise the struggle of men between Gods and demons.

A path way between the statues allows visitors to walk on the water, crossing the middle-east pond while observing the Pandawa and Kurawa figures. 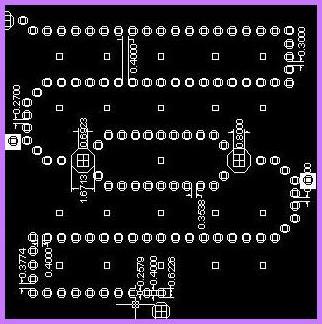 To depict the endless transition of men between good (deity) and bad (demon), eight lifelike sculptures have been erected in a circle at the meditation area, the most magical part at the north-west corner of the garden. Clockwise: man-deity, deity, deity-woman, woman, woman-demon, demon, demon-man, man, and back to man-deity.

In Bali Hinduism-Buddhism, the endeavour of life is to follow the path (Dharma) to reach Moksha (Nirvana), the ultimate freedom, even from good, bad, life and other illusions like freedom it self. As Dharma can not be forced, men is subject to a never-ending struggle in the depicted circle (Samsara), unless Moksha is reached.

The above sculptures were based on my drawings below.

Between the eight lifelike sculptures that depict the endless transition of men between good (deity) and bad (demon), meditative ornaments have been laid on the floor of the meditation area.